It’s been over a month since I revealed who I really am and I wanted to post an analysis not just for me for those of you who are thinking of going on the same journey.

For years, I’ve used a pseudonym for my internet platforms in order to reveal my true self without criticism from those I personally know. I also did this for my protection. 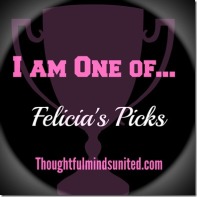 But what happened now that I’ve revealed myself and become completely uncovered?

Before I give you this answer, I want to share why this unveiling was so  important to me. Under the guise of Felicia, I spoke about things that those closest to me have just now been told. By dismissing Felicia, I have opened myself up to those of whom I know and don’t know; to face whatever rejection, teasing, or applaud I may receive. I allowed them a chance to enter into something that I’ve semi-secretly deemed important for about three years.

As I expected, the initial reveal had little response from family members but had more of a response from those in blog land. All was positive and transitioning names was fairly easy.

However, what I did not expect was the engagement that would happen afterwards.

Because I blogged under a different name, I would often be very vague about what I told outsiders about the blog
especially because I knew they would look it up.

Nowadays, the most unexpected people that I meet have taken interest in it! This includes my therapist, a lady that I volunteer with, and some of my friends.

What’s even more unexpected is that I’ve had my friend, Zach, guest star on TMU and am bringing others in. The interesting thing is that I am not shoving TMU down anyone’s throat, they simply want to be a part of it.

So, I guess the lesson in all of this is that life is unexpected; the scariest things can be rewarding.

BUT think thoroughly through the decision to unveil your real name.

Thank you all for your support!

What have you experienced that was initially scary but paid off in the end?

I look forward to your thoughts!

8 thoughts on “What Happened After I Revealed My Real Name?”